Toyota GR86: All We Know

· Sponsored Editorial Content
Joined Mar 3, 2020
·
14 Posts
A spiritual successor to the legendary Toyota Corolla AE86, the Toyota 86 will live on into a second generation next year and will reportedly be badged: GR86.

It’s no secret that the Toyota 86 and the Subaru BRZ are due for a generation change. The twins have captured the minds and driveways of enthusiasts around the world since 2012. As we mentioned above, the new 86 could come bearing the GR badge which means it will be tuned by Toyota’s racing division… making it even more attractive!

Leaked Toyota documents indicate the car will arrive sometime in the summer of 2021.

The GR86 will be borrowing the engine from the Subaru Ascent. This was cause for much rejoicing as people have demanded more power from the flat-four engine in the 86 for years. And the FA24 from the Ascent, a 2.4-liter turbocharged four-cylinder boxer with over 250 hp and 277lb-ft of torque would mean a serious bump in power. But it seems the news could be only partly true. While the engine will be from the Ascent, it is likely that it will be a non-turbo version of the boxer engine.

As disappointing as that sounds, the engine is still an upgrade over the 2.0-liter boxer unit. The car should still make about 215 hp and upwards of 170 lb-ft. of torque. It will obviously be available with a 6-speed manual. As for the automatic, it’s not clear if Toyota plans to update the out-dated 6-speed in the current 86 or opt for more gears – as is the trend these days.


​
One of the reasons Toyota wants to go with a naturally aspirated powertrain is the GR Supra 2.0. The more affordable Supra is powered by a 2.0-liter turbocharged four-pot from BMW which makes 255 hp, which is almost identical to the output of the turbo FA24 engine from the Ascent. Toyota clearly would like a considerable difference in performance between its flagship sports car and the affordable option which costs over $15,000 less compared to the Supra. Hence, we think that the GR86 will almost certainly get a naturally aspirated motor.

http://instagr.am/p/CD1pMLvBoMl/ The new Toyota GR86 was recently caught testing in Ann Arbor where Toyota has its engineering, design, and prototype building facility. According to previous reports, we believed that the TNGA platform would underpin the GR86 (if that’s what it will be called) but the spy shots show a silhouette similar to the current car which suggests that the new 86 will probably be based on a heavily reworked version of the current platform.

The spy shots also reveal a more striking front with a much bigger grille and much sleeker headlamps. The overall design lines seem consistent with the current car but the rear end seems heavily reworked as well. The trunk sports an integrated spoiler and tail lamps seem to be wraparound units that slope towards the lower end of the trunk. The tail looks sharper compared to the stubby rear end of the current car.

http://instagr.am/p/CDuuSgyFPEb/
GR86 Chassis and Suspension
Details on the new GR86’s platform remain unconfirmed. Some reports have indicated the car will make use of Toyota’s New Global Architecture, which underpins numerous other new Toyota models. However, conflicting reports hint at a modified version of the current platform, which itself is based off the Impreza chassis.

What we can tell you is that from the spy photos taken so far, test mules have been spotted using what appear to be 18-inch wheels with Michelin Pilot Sport 4 tires. This is important as current 86 models run on 17-inch tires and have been criticized (or praised) for not having enough tire grip. Only current models equipped with the TRD Handling Package come with this setup.

The 86 is jointly developed by Subaru and Toyota, in fact it uses and will continue to use a Subaru powertrain and maybe even a Subi chassis. Plus, given Subaru’s focus on safety, it is likely that the BRZ will come with its EyeSight driver assistance system as standard while a similar system will be adopted for the 86. It is likely that Toyota too will equip the 86 with its Safety Sense driver assistance systems. It will likely include features like AEB with pedestrian detection, lane-keeping assist and blind-spot detection as standard. Adaptive cruise control will be available with the automatic versions only.

Details about pricing and trim break up remain elusive as of now but we expect the GR to be slightly pricier than the outgoing model and if the 86 does bear the GR name, the trim lineup could be shaken up as well.

The answer is Miata, the age-old adage holds true even today. The little sports car from Mazda is the one to beat in the segment and with good reason. It exemplifies everything that should be right in a car. It is light, adequately powerful devoid of intrusive driving nannies and is a convertible. It is possibly the most fun you can have on the road, budget immaterial. It is powered by a 2.0-liter engine making 180 hp, though it is less powerful compared to the upcoming 86, its fun to drive character along with the option of open-top motoring continues to attract buyers

Our Final Verdict
The Toyota 86 will always have a special place in the enthusiast’s heart. It is one of the very few affordable sportscars that are still available off the showroom floor. Though it is a shame that the new GR86 might not come with the turbo 2.4 boxer that we were expecting but with the Mustang as its yardstick, we can be rest assured that it will certainly be something special.

· Registered
Joined May 1, 2020
·
148 Posts
I read this yesterday and all I can say is well done.
It is a very well written article on our awesome little sports car. I especially like what was said in the final verdict. No matter the power plant in the car it will be a great car just like the previous car is.

The new Toyobaru RWD sports-car twins are due to receive an injection of power, with a turbo engine possibly making more than 250 horsepower.

The new Toyobaru RWD sports-car twins are due to receive an injection of power, with a turbo engine possibly making more than 250 horsepower.

· Registered
Joined Aug 27, 2020
·
563 Posts
Sorry-I pushed the wrong button. I'm not sure why publications keep pushing the turbo option on the 86/BRZ. I assume it is to drum up excitement about the vehicle. My opinion take on this is a follows:
1) In an average car manufacturer selling multiple vehicles including a large portion of SUV/CUVs if total amount of vehicle sales were to equal a novel 1 1/2 inches thick I'm guessing total sports car sales would only be 1 page. My point is sports car sales are a very small portion of any profitability.
2) Based on item one I believe the new car is using a modified platform of the existing car rather than re-adapting from the new FWD Toyota platform. It is more cost efficient and requires less engineering. Also it is easy to improve on the existing platform. Chrysler took an old mid 90's Mercedes e-class platform and modified it for the RWD Chrysler 300, Dodger Charger and dodge Challenger. To this day they are still using this platform in modified form 20 years later. The BRZ/86 platform has been a very good platform that has been incrementally improved upon over the last 8 years.
3). That would mean based on the current cars engine compartment the new cars engine compartment would likely not be changed that much. To do so would require significant engineering adding cost to the project.
Therefore going on the assumption that the engine compartment in the new car roughly the same size as the current cars it is unlikely that Subaru would spend the engineering to fit a turbo, intercooler, wastegate and all the turbo plumbing necessary to support it. Not to mention the extra weight it would create. That means upgraded brakes, suspension. The result then could add weight to front end causing a change in front to rear weight distribution. Result more engineering to shift weight to the rear to balance the distribution and keep the ideal balance the current cars platform has.
4) Based on this and the fact we heard the car is going to slightly lighter I can't see a turbo. Of course many will argue that a few aftermarket companies already make a turbo conversion for the current car. However your average car manufacturer has durability standards that are probably a lot more conservative. I'm guessing durability of 100,000 miles for engines. Aftermarket would not offer any of this guarantee.
5) Even without a turbo a N/A 2.4 offers more torque (guessing 20 LBS extra at a lower RPM) and more horsepower. My wish. I hope the engine is smoothed out even further than the upgrade they did in 2017. They use a slightly higher final drive ratio. They use a lighter flywheel for faster engine revving. I'm guessing the 2.4 does not weigh significantly more than the 2.0 and does not take up any significantly more space in the engine compartment.
6) Prediction with roughly the same weight or slightly lighter, more aggressive gearing, lighter flywheel, more torque, more horsepower 0-60 in the mid to high 5's.
7) I need ot apologize. I'm new to this forum. It has just occured to me that everything I have brought up has probably been discussed a "thousand times" already. Forget everything I've said.....................
S

The FR sports created in 2012 by the joint development of Toyota and Subaru will switch to the second generation in March 2021.

The current BRZ has already finished accepting orders in July 2020, and the Toyota 86 is also expected to end sales in September 2020.

The basic chassis is a carryover of the current model, but the knowledge gained from the improvements made so far has been utilized to obtain the rigidity suitable for being called a new model.

The engine mounted on the high-rigidity chassis is a 2.4-liter, horizontally opposed 4-cylinder FA24 model. The displacement increased by 400 cc from the current type has a great effect on increasing the torque, the maximum torque has been increased from 21.6 kg of the current 2L to about 24.5 kg, and the maximum torque generating rotation has been reduced, greatly improving drivability. ..

Unfortunately, the price is likely to increase from 3 million yen, but it can be said that it is a full model change with enough value.
Click to expand... 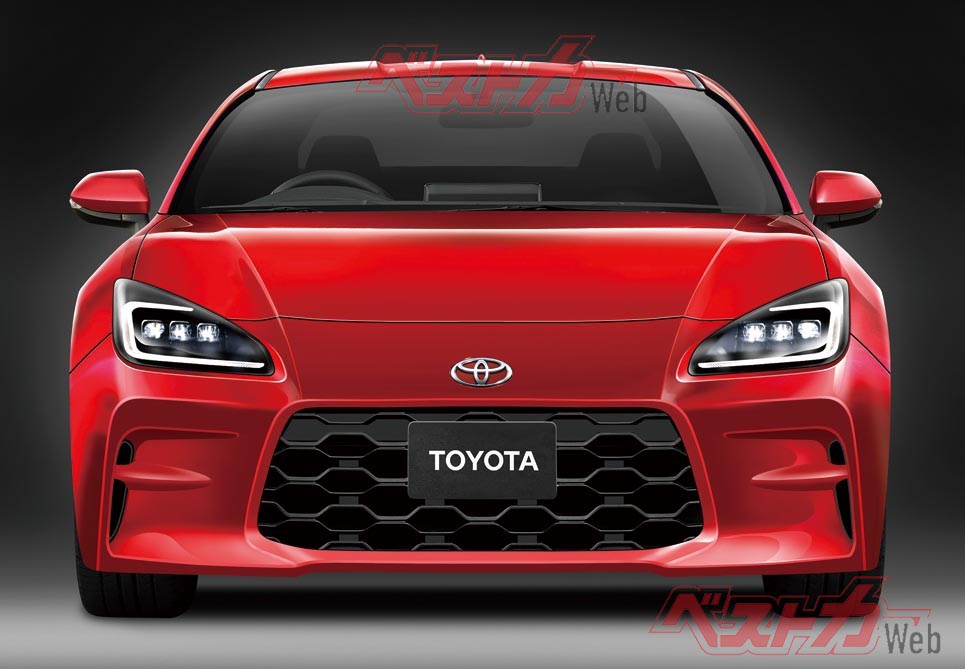